I am currently accepting Young Adult novels for review. Please contact me at whoneedssleepblog@gmail.com

Follow Who Needs Sleep? A Book Blog With Character on WordPress.com

Hello readers, and welcome to another day of random fact blog posts. So far we’ve covered archery and cooking. So, following this trend, today will be about genetics! (Just kidding, there is no logic, life is anarchy). Today, we will be learning how to understand your own DNA, some facts about the human genome, and how to destroy the world with some time and a $300 Crispr kit!

Hear me out. Genetics are literally the source code of all life as we know it. And yet, some people know absolutely nothing about what makes them tick!

Okay. We will start at the basics. DNA.

DNA is the stuff that tells your body what proteins to produce and basically dictate how your body works. The entirety of the coding part of DNA is made up of four nucleotides that we call T,C,A, and G. Sort of like binary. Four different amino acids may not sound like enough options to code for all life as we know it, but human beings have three billion pairs of these in our genome. That allows for a lot of variation. Trust me.

On a side note, those fun little $75 ancestry DNA tests that are all the craze nowadays (I did them, they are really cool) only sequence about 900,000 base pairs depending on the test, so don’t put too much stock in the results when it comes to diseases. Many illnesses are influenced by many different genes, so just because one might say you are 2x more likely to get diabetes doesn’t mean that’s necessarily true, as you could have five other genes that state the opposite. If you really want to know, get your whole genome sequenced or go home. The price is really affordable now. It’s gone from $3 billion to a few thousand dollars in just the fifteen years since the first human genome was sequenced! That’s quite a reduced rate!

Back to understanding DNA. You have three billion base pairs in your genome. This means that you have three billion base pairs of DNA in each cell. Crazy right? That’s the equivalent of 700mb of data stored in each human cell, or roughly 70 Zetabytes of data in the human body. That’s nuts. That is more than the entirety of data used by human beings. More than every movie, every website, every image and secret government AI ever created in the history of the digital age. In one human body. Insane.

As a side note, as the entire human genome can fit in 700 mb, all of what makes you you can be stored on a CD. Hilarious. Of course, most genomes are so similar, we could probably compress it down a lot further than that, but why? A CD costs next to nothing at Best Buy .

So, each human has two sets of chromosomes, one inherited from the mother, one from the father. When you have a child, you only pass down one of your two chromosomes to your kids. It’s (mostly) random. This means that if you have a gene on one chromosome, say, for an extra finger, and one chromosome without that gene, you have a 50/50 shot of passing on that gene to your kid. If the child gets the gene from you, and a normal one from his father, and gains an extra finger, the trait is dominant. If the kid gets the gene from you, a healthy gene from his father, and only has five fingers, then the trait is recessive, meaning both genes need to have the same mutation to express it. Most diseases are recessive, as if you had a dominant disease in prehistoric times, you often didn’t survive to child bearing age, whereas if the disease is recessive, you could carry the mutated gene and pass it on without showing symptoms due to your other, healthy gene.

However, some autosomal dominant diseases, such as Huntington’s, do exist today. These diseases are often particularly horrible as many people don’t know they have it until after having kids and having a 50/50 chance of passing it on to them.

Now inheritance is usually a little more complicated than this. There usually isn’t a “blue eyed gene” or a “smooth skin gene”. Many genes factor into having one trait, and untangling them all is often confusing. In addition, recently scientists have begun to understand the effects the environment has on influencing what genes get expressed in your genome.

This environmental effect on gene expression actually explains a lot about why we can’t just insert a gene into someone and know the outcome, or why a person with a lower genetic likelihood of cancer might still get cancer.

However, despite all these crazy factors influencing our genes, scientists are getting closer and closer to cracking the human genome. In fact, there is a crazy cool new project being implemented where scientists are collecting one million human genomes through volunteers to help solve this mystery once and for all. I’m going to sign up. And no, I’m not afraid of government subsidized cloning, or insurance companies getting hold of my DNA because let’s be honest here, all it takes is a single skin cell to know your entire genetic makeup. In ten years, DNA tests will probably be so cheap, any Joe Shmo could pluck one of your hairs and get it sequenced for the price of a meal.

So that’s the basics of genetics. We are only going to discuss one more really freaking awesome and slightly terrifying thing today and that is the idea of gene drives.

“What’s a gene drive?” you ask, as you’re not totally bored yet by my rambling. Well, remember how I said that the mommy and the daddy each pass down one gene? So if the mother has a gene for, say, invisibility and one for laser eyes, the child could get either one? Well, gene drives allow you to play God in that you can choose which gene will always be passed down. So you can design it so that invisibility will be passed down to all the kids, and all the kids’ kids, and so on forever until every person on the planet has invisibility. This is wicked crazy.

How a gene drive works is a little too complicated for a random fact post on a book blog, but let me grossly oversimplify it. Basically, scientists take, say, a mosquito and alter one of its genes with CRISPER/Cas9 (a cool new technology that lets us edit DNA). This new gene has whatever we insert in, plus a little segment that instructs the “normal” gene in the other chromosome to be cut out. So, after the normal gene is gut out, the broken chromosome needs to repair itself, and does so using the second, altered chromosome as a template, thereby copying the altered gene. As the mosquito has little nasty mosquito babies, the gene gets passed down to them, altering the other, healthy chromosome. Now, with two altered chromosomes, that trait is 100% likely to be passed down to the next generation. And on. And on 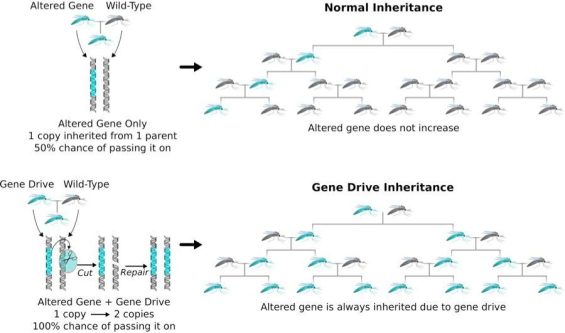 So think about it for a minute. If we were to use a gene drive to make all female mosquitoes infertile, the gene would rapidly spread via the males until every female mosquito is dead, and the entire mosquito population becomes extinct. I’ve also heard it hypothesized that with the rate of reproduction, rendering an entire mosquito species extinct by releasing a handful of altered mosquitoes would only take a few years. That’s it. A few years and a 300 dollar CRISPR kit to wipe out humanity’s #1 killer (other then other humans). Isn’t life insane?

So yes, genetics is terrifying, and complex, and it’s easy to shy away from it and not want to know or give anyone your genetic information, or use this technology on plants or animals. And you have a very valid point. However, for better or worse the genie is already out of the bottle, so if you really want to save this planet from humanity’s mistakes, make all research go through very public, government approved processes and pass preemptive legislation. Banning GMO’s and burying your head in the sand is more harmful than it is helpful. We all have a responsibility in this new age of unprecedented technological advancement to use our new tools with caution and respect, and the best way to make that happen is to educate yourself and encourage transparency. So let’s do it!

On a side note, happy May Day everyone!